The red deer on Blacka are wild animals, free and unmanaged. They are therefore unlike the deer at Bushey Park or Richmond Park near London, or the herds that may be seen in the grounds of Chatsworth and other stately homes. Their wildness gives them a special appeal to those of us who see our landscape as too regulated and managed. These animals being completely outside the economy and therefore the agenda of managers give just an indication of what a more wildlife dominated landscape would look like. How long it will be before vested interests destroy that is anyone's guess. Those who have watched the way that local managers work will not be optimistic.

In an important sense the place belongs to the animals that are there throughout day and night in all seasons and weathers, leaving many of us feeling that we are their guests and privileged to see them. Being free spirits means their presence cannot be relied on. You can visit Blacka twenty times and fail to see them; or be lucky and see them three days running. They may be in secret parts of the woods, or hidden in bracken or even several miles away. 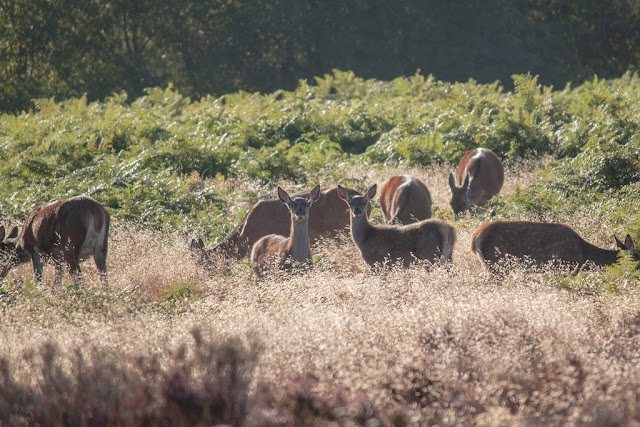 In their freedom the red deer are similar to roe deer which also exist in the woods and open areas. The differences are in size and also habits. Roe deer are territorial, the bucks not welcoming the presence of other males, and there are often two or three does in a group. 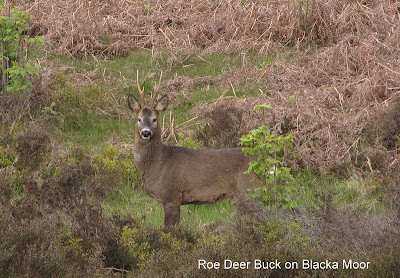 While all deer are timid and avoid humans roe deer are even more so than the red. It's not common to see roe deer out during the day. They like the twilight hours. 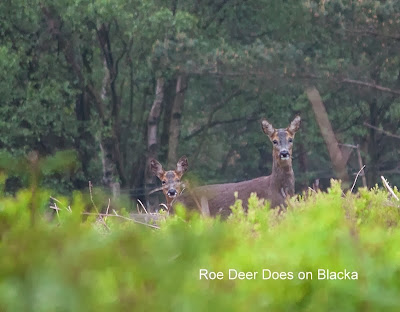 Red deer may be in mixed groups of hinds and immature males while the stags spend much of their time in same sex groups. The rut happens in October when the dominant stag will fend off other stags from the group of hinds he has gathered around him. 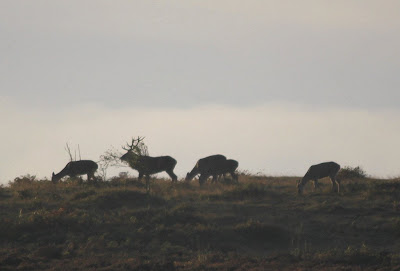 Hares are fairly common in both open and wooded parts while rabbits are less often seen here.

Badgers make numerous sets and there are many around Blacka in both wooded and open sections of the site. 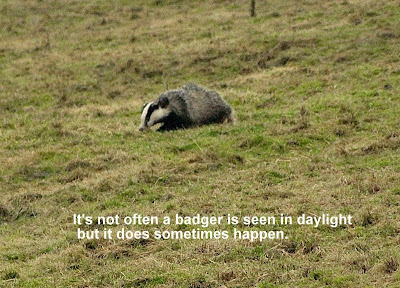 It's not easy to know how many there are but the sets being used are usually easy to identify. Foxes are also occasionally seen in the early morning on the moor.

Smaller mammals such as voles or shrews are common especially in old stone walls where you may occasionally see a face looking out. 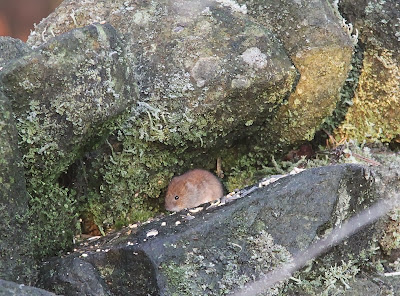 Their toughest predator, the weasel, is also present here and sometimes seen. 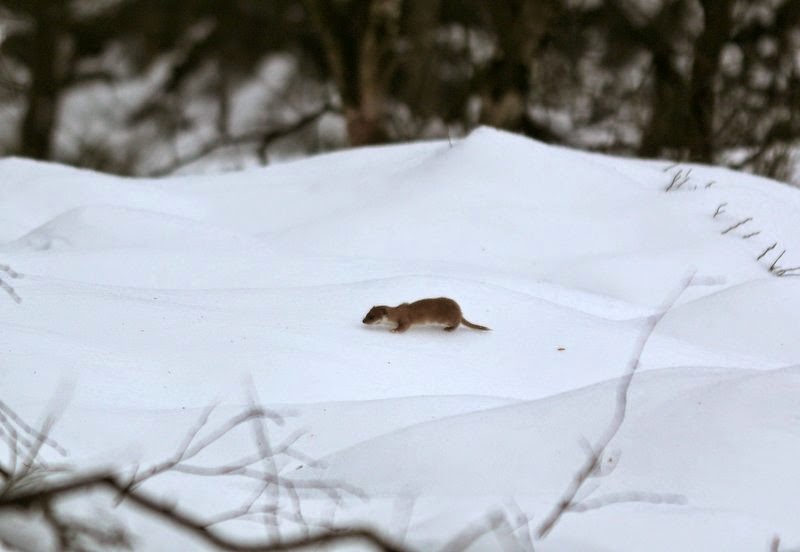 One of the commonest animals is rarely seen though the evidence is throughout. 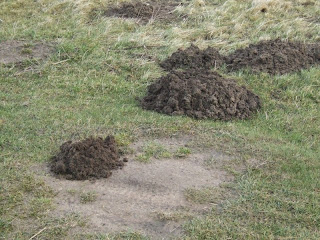 This page has concentrated on the mammals because much of the attention from the conservation industry is on birds (when they are not thinking of grazing livestock and farm subsidies). Birds are certainly an important part of the appeal of Blacka in spring, with large numbers of summer visitors arriving in April, warblers and cuckoos being special favourites. 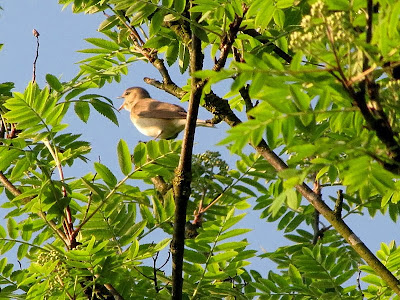 To this writer the songbirds are easily the favourites. On the artificially maintained open areas those birds that like that habitat are found such as pipit, stonechat..... 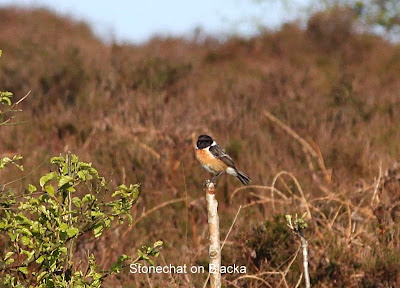 .......and whinchat, while on the woodland edges it's common for a walker to disturb a woodcock. Skylarks can often be heard and seen over the unmanaged land on the western edges beyond the boundary track where there is lots of deep cover. Curlew are to be seen and heard on the overgrazed sheep pasture in spring.

Among reptiles living on Blacka, adders have been found though not often. You are more likely to see a common lizard on a warm day on one of the old stone walls. 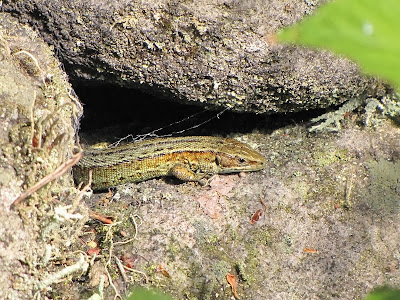 Trees should not be forgotten in any account of wildlife. They are arguably the most significant, certainly the tallest. Each birch tree is host to many forms of life most not easily seen. But spring birdsong is best heard from birch and rowan and oak. 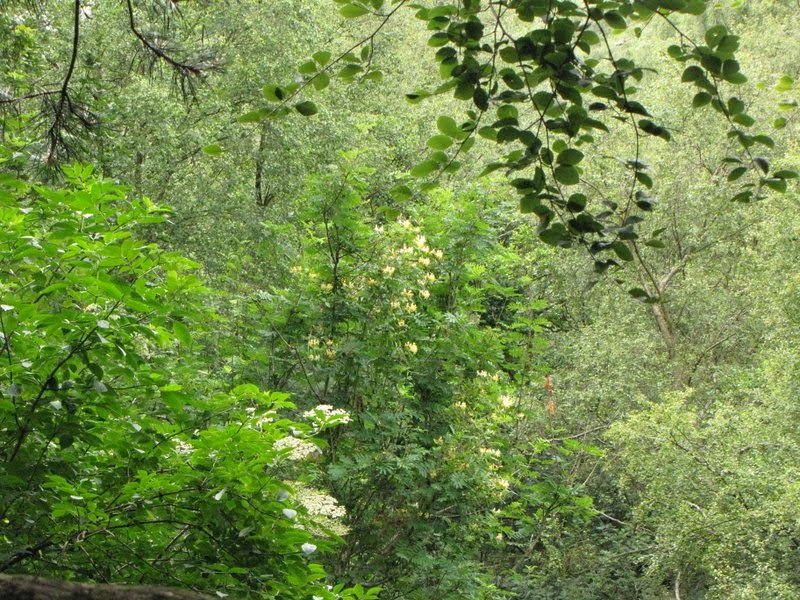