....... not really the Law of Mass Action but there are similarities. At the weekend the law came up against mass action in relation to Critical Mass, the cycling pressure group in London. Outsiders trying to make sense of the growth of cycling in cities should read the theory of critical mass. But as with all mass movements some who associate with it take it into areas of dubious rationality. For example the mountain biker a few months ago who justified his illegitimate riding on a walkers-only  path by referring to ‘demographics’ and the Kinder Trespass!!

Those buying shares in the bicycle industry a few years ago might have made a good choice then. Deciding to do so now might just be missing the boat. Unless the Critical Mass people have their way and most of the world turns to two wheels. Critical Mass is related to game theory and not unlike a tipping point. But for cycling other factors are at work as well. Coverage of cycle racing on the media is one of these. One of my neighbours appeared transformed on his drive on Sunday dressed as if for the Tour de France. I’d had him marked down as strictly a 4 wheel man.

There are a number of ‘true believers’ in and around the cycling movement but I’m not sure they share the same gospel. Do those who want to reclaim the streets as a corrective to the harm done by the motor car also advocate downhill mountain biking when it harms public footpaths? Perhaps if you’re trying to gain a critical mass then you’ll welcome anyone who pedals as another addition to the statistics? And there is an underlying sense that sections of the world are unfair to cyclists not easy to deny when you see the way some people drive cars and trucks and certainly fed by things like this. (!!!)

To declare my hand, I’ve always supported travel by bike as preferable to the car on local streets and, as something of a pedestrian chauvinist, I want to join those who think our roads should be more than through routes for car drivers in a mad hurry. But I was once knocked down by a cyclist on a pavement and can’t feel enthusiastic about those whose pedal power agenda leads them to ride as fast as they can. I like gentle touring and from an early age associated cycling with pleasure rather than intensive hyper-activity. 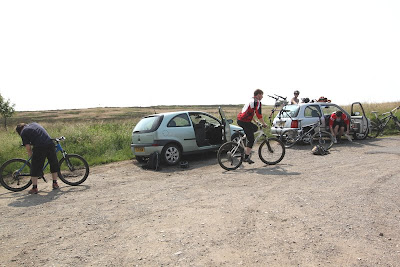 But much of the respect I’ve felt for cyclists in recent years has been related to their perseverance up the hills of Sheffield. And now, increasingly, the mountain biking sector is driving cars to the top and cycling downhill with only mild level or uphill stretches in between. So the walker who has set out from the valleys to slowly reach up to the heights could find himself being buzzed by a group of bikers coming down at great speed having taken an easy way to the top.

Some dubious rationalisations are made on the fringe of these movements. Earlier this year a blog post on the Guardian’s website referred approvingly to Greno Woods and Sheffield Wildlife Trust’s love-in with Ride Sheffield as if these biking trails were downhill but without any downsides for other users. Some of the comments made by bikers under the article suggest they live in a parallel world alongside fairies where cycle wheels don’t touch the ground. Self belief has truly crossed over into self deception.  But everyone is prone to believe supposed evidence however tenuous if it supports our point of view. 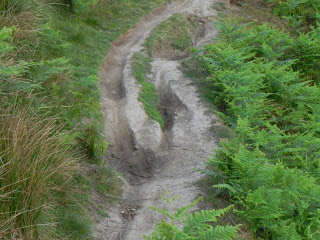 One fellow claims that ….”Riding a bike through a wood causes less damage to the path, and leaves less alien scent on foliage (which can disturb other wildlife) than either walking or horse riding. Cyclists are obvious and natural partners for local authorities, National Trust etc who have wild land to look after, etc …….” Perhaps he’s planning a career in spin doctoring. 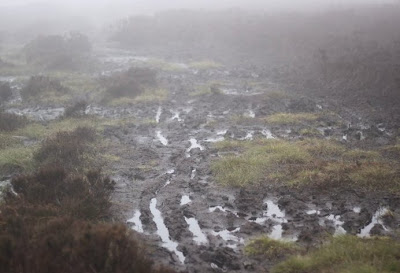 And best of all is the one who claims there are all sorts of academic studies, to which he links, proving that mountain bikes create no more, or even less, impact on the ground than walking!!! If he has ever been to Blacka Moor he was surely blindfolded at the time and so would have been his dodgy academics. So one might ask, what was Ride Sheffield doing spending time on the Devil’s Elbow route repairing the damage their members had caused? And does he know the Wimble Holme Hill route? 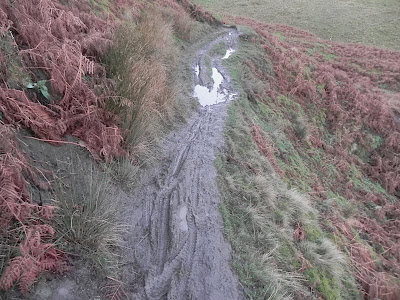 Walkers/pedestrians and cyclists should be natural allies on the streets, both fnding that the dominance of the motor car can make life difficult. I suspect that some of the more madcap MTBers could also be pretty reckless in their cars.
Posted by Neil at 2:18 pm

I decided some time ago that I would no longer automatically allow comments from those who signed in as simply 'Anonymous' rather than giving themselves some sort of identity.

But the comment below is symptomatic of a certain attitude, fortunately not shared by all bikers. So it's worth publishing because it sheds light on a problem. Some of it's the usual thing of not reading the post before jumping to conclusions. Is what I say "a rant"? Or can this person not cope with another perspective? And just as a matter of information I have worked with bikers and continue to do so because sometimes our interests coincide.