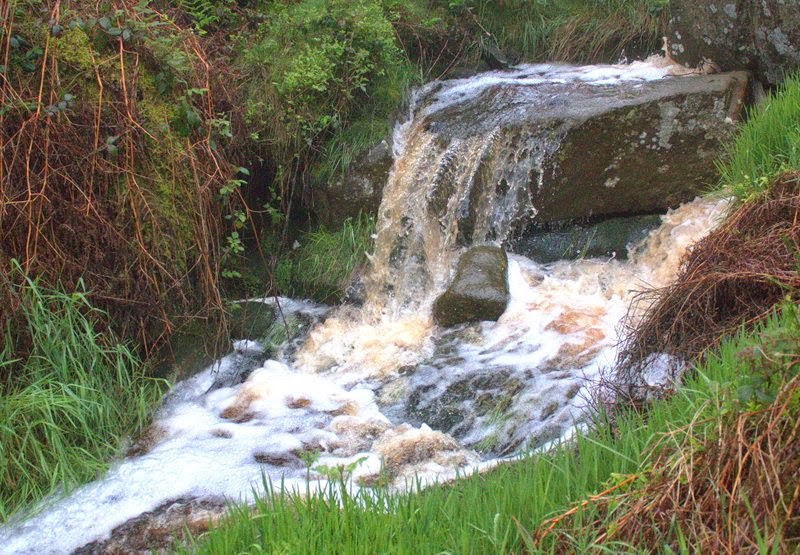 It’s often the case. You meet one of the regulars. You get talking about Blacka and sharing enjoyment of its wildlife, then eventually get round to the management.  He/she shakes head despairingly. “It’s all political” is the parting shot. Nothing can follow that. Fatalism is not pretty but it’s hard to deny that there is a lot of scrabbling about for power going on.
___________________________________________

I was walking in the rain and it was exhilarating. The whole natural experience was wonderfully alive. Newly greened trees had a vibrant quality and colouring that surprises each year after winter. The intensity of bird song amazes with warblers, blackbirds and cuckoos competing. There were deer in the scrub and two young thrushes appeared on the ground with a parent just ahead. This is all in land adjudged to be in unfavourable condition where the previously favoured shooting estate vegetation had been taken over by un-planned, un-managed and un-designed natural succession. The leafy trees in view were Rowan, Oak, Beech, Birch and Alder.

I fell to thinking who could not be thrilled at this? And I thought back over attempts to influence management decisions that seemed perversely not to value such an experience. I thought of the Icarus consultation in 2006, of the RAG meetings, of the Sheffield Moors Partnership meetings. At least the Icarus meetings had seemed to agree ‘minimal intervention’ though that was quickly ditched by SWT, followed by a period of minimal consultation, minimal public involvement and the kind of intervention that gets the default setting the opposite way round.. And I thought of the event last year run by Action for Involvement. And of the day last week at the Wilder by Design event of Ian Rotherham when I listened to a recital of reasons why ‘somebody’ has to be in control of the process whatever level of wildness is agreed on. It amounted to a defence of intervention. Yet all I’ve been enjoying has been the result of non-intervention. Wherever I’ve seen intervention the result has been not just disappointing but utterly demoralising. Is there no place for my sort of countryside then in this version of the new ‘wilder’ – a key word definitely not ‘wild’ and capable of interpretation as a bit less tame like leaving an uncultivated bit at the end of the garden.  Hardly inspiring. It can be wild but I have to be in charge. Does the height of our ambition have to match that of a council officer waving a file of health and safety guidance?

I considered what the public’s place was in this policy making. I asked a member of Natural England’s board why we don’t know about policy making at NE Board meetings and was told they were confidential - paid for by us of course but confidential to those we were paying.  I wondered why certain people and groups marked out as stakeholders don’t want to discuss policy and don’t engage with the few consultations that happen. The Local Access Forum meetings are themselves protected behind an access wall: you can’t put forward items for discussion, you need special permission to attend as an observer and members are appointed not elected. I noted that Ian Rotherham’s group, called Econet were not to be seen engaging in the Sheffield Moors Partnership consultation (if you can call it that). Nor in any of the other apologies for public consultation over the years.  I had not known of Econet's very existence nor its multiplicity of acronymic sub groups kept away from public engagement, at least any I was aware of. Perhaps the public is too low down the pecking order for them to be bothered – or am I being unfair? I had twice in years gone by tried to contact Ian R but had not had a reply.

Certainly Mr Rotherham is distinctly unfair himself to those who presumed to put on an event last year. His complaints about it are, I find, in an article titled The Call of the Wild. He disliked it so much that he writes his critical comments in colour and repeated them in his presentation last week only this time projected onto a screen and judgements picked out in multi-coloured capital letters. Yet this event he complains about was an attempt to get some discussion instigated from the bottom up by members of the public frustrated that nobody wanted to discuss these things with the public. And wasn’t he consulted about the event by the independent facilitator? And wasn’t he there himself and able to put his point of view? I was there and didn’t hear him say a word. What's going on here? The regulars would call it 'politics'.


It seems to me that some professionals in this area beleive the last people who should be allowed to have a say in what goes on should be the public, the consumer of the ‘product’ created by conservation professionals.

I’ve said before: I’m a customer, a consumer of the landscape product these people claim the right to design and implement. I’m not a conservation industry professional or academic, nor a landscape manager, farmer or gamekeeper and don’t pretend to match those specialisms but just as I judge medical professionals by my experience of them and a new car, phone/tablet by whether it works for me on the basis of my personal observation and experience I’ll do so with the conservation industry, in the field and in theory in the universities. So far I’ve not been impressed. They have seemed to be high on rhetoric and low on delivery. I would have taken a new car back and demanded a refund by now.

And I do want a substantial part of the landscape I visit to be free from human affairs the human economy and all the exploitation and devious motivations and incompetence that inevitably follows from that. That’s not to say I don’t enjoy those very humanised parts where a talented, artistic and sensitive mind has helped to shape some of our more attractive farmed landscapes and our great parklands. But the design of pleasantly artificial country house parkland is only fully enjoyed alongside an awareness that we also have something other, that man has very little control over. Without that the artifice has no context.

So I'm certainly not impressed by those claiming to have special knowledge of landscapes when they tell us that over managed hillsides should be kept artificially free of trees through expensive interventions and that if we don't like it we shouldn't go there. Shouldn't go there? With all that public money, our money,  going into the flawed management don't we have a duty to make our views known? How presumptuous of us to express a view.
Posted by Neil at 7:25 pm